Hello everyone, this week’s interview is with Jan Jan. Jan Jan is a Kachin-American who was born and raised in Northern Virginia. She currently is the founder of the organization GM4MD and is doing some wonderful work in Washington D.C. advocating for the people in her country of origin, Burma/ Myanmar, on behalf of her organization. You can read the rest of her story below.

1. Tell me about yourself and your country of origin.

Jan Jan is actually just my nickname but everyone calls me that, even my parents, so it’s been pretty synonymous with my first name growing up. I am an older sister to three younger siblings and am also the eldest grandchild on my maternal grandmother’s side. I have many cousins on my dad’s side of the family, and am one out of 19 grandchildren under my paternal grandparents, who were a Reverend (grandpa) and school teacher (grandma).

I grew up going to church on Sundays in D.C. with my Burmese church community from the DMV area, which has played a significant role in my cultural identity and upbringing. At home, my parents and grandparents raised me speaking in Kachin mostly, so the Kachin language in itself largely influenced my identity as a Kachin-American growing up. My country of origin is Burma/ Myanmar, which is a predominantly Bhuddist country that is home to 135+ ethnic groups, hence the Burmese and Kachin upbringing (two different cultures and languages that come from the same country). Kachin people, like many other ethnic minorities in the country, also belong to the category of religious minorities in Burma because they are mostly Christian in a country of mostly Buddhist people.

I’m not gonna lie, it was really difficult growing up for me to be able to bridge the gaps and navigate between my two different worlds (American vs. Burmese/ Kachin) growing up in the States, and the expectation to be able to speak fluently in Kachin on top of that was pressuring as a kid who just wanted to fit in within American society and culture. Regardless, I’m happy about the way I was raised by my parents and family because it has really kept me grounded in my cultural roots and has played a big part in shaping who I am today.

2. What is your favorite thing about your country?

I wish I could show pictures of the people in the country but will refrain from using pictures that show anyone else to ensure their safety during this time.

3. What issues is your country facing and how can others provide support?

The biggest issue that Burma is facing right now is a violent military coup on top of 70+ years of persecution of ethnic minorities by the Myanmar military. Having said how generous and kind the people of Myanmar are, they are not deserving at all of the abuses that the military perpetrates upon them on a daily basis. While there shouldn’t even have to be a distinction or assessment of who is deserving of brutality or not, no one is deserving of any harm whatsoever, let alone the people of Myanmar.

Because of the military coup on February 1, 2021 (just last year) hundreds of thousands have had to flee their homes into refugee and IDP camps, or simply find shelter in the jungles. Many of these people seldom have a steady supply of food, sturdy shelter or clothing because they run with the clothes on their backs when fleeing. In addition to forced displacement, there are many innocent civilians who have been brutally murdered, arbitrarily arrested, and imprisoned for no reason by the Myanmar military. My cousin’s grandpa, for example, has been detained in prison since the coup, and I have another friend who has also been arrested and sentenced to 10 years in jail simply for being a bright activist.

In order to provide support during this time, I ask that anyone reading this prays and speaks up for Burma. To stay aware of what’s happening, follow the hashtag #whatshappeninginmyanmar on social media, follow the accounts of Burma advocacy organizations and activists on the ground, and read up on the news about Burma. Share educational posts about what’s happening in Myanmar to raise awareness, join in on a local protest for Burma if there are any near you (there’s one coming up in DC on April 16), and call Congress for Burma (this is the most ultimate action you can take as a U.S. citizen!). Resources including all of the above mentioned can be found here in detail.

4. Tell me about your organization GM4MD and what its mission and goal is.

GM4MD stands for Global Movement for Myanmar Democracy and basically, in a nutshell, our mission is to build and strengthen networks for Burma pro-democracy advocacy and meet technical needs for informed and targeted youth empowerment activities. We envision a future where youth in Myanmar have opportunities to follow their own interests and passions in peaceful thriving communities without violence. If you’d like to learn more, you can read about our organization and story here: https://www.gm4md.org/. You can also follow us @gm4md on Facebook, Twitter, Instagram, and TikTok!

5. What is the most challenging aspect of being a female activist?

I would say the most challenging part is that you will often be in a room full of old men (nothing against old age or men) but just considering the patriarchal nature of how our global society has been up to date, it may sometimes feel frustrating that this pattern has not changed yet. I feel like in a way, I am living ahead of what the current time is still reflecting, or maybe the current times are just being slow and need to catch up. I feel like female activism shouldn’t even have to be a thing, but it is because our world still is really slow and having to catch up to us in terms of achieving basic gender equality/ equity plus simply having more women fill up traditionally male-dominated spaces!

Having said that, I am still so very grateful for the many men I have met since stepping foot into the Burma advocacy space, who are now mentors, uncles, and older brothers to me. It is because of their support that I have also been able to get to where I am today, and for that, I am truly thankful.

Although there haven’t always been many women around in the Burma advocacy space, the good news is that there are more starting to appear now! This has been largely due to the urgent nature of the coup, but either way, I am always very grateful for the rare women who’ve already been in these spaces before for decades and look forward to meeting many more in the future as I am currently enjoying new-formed friendships with fellow women I have just met within the past year. Although I’ve only met new female friends within this past year, many of them already feel like sisters to me because we click culturally and have a shared understanding/ sentiment about what’s happening in Burma.

On another note, parallel to the gender complex, there historically has not been many people of color yet when it comes to the formal DC advocacy spaces particularly, but I see that this is starting to change, too, which is another cause of celebration tied with continued determination to keep pushing past the old norms and move towards a better future. 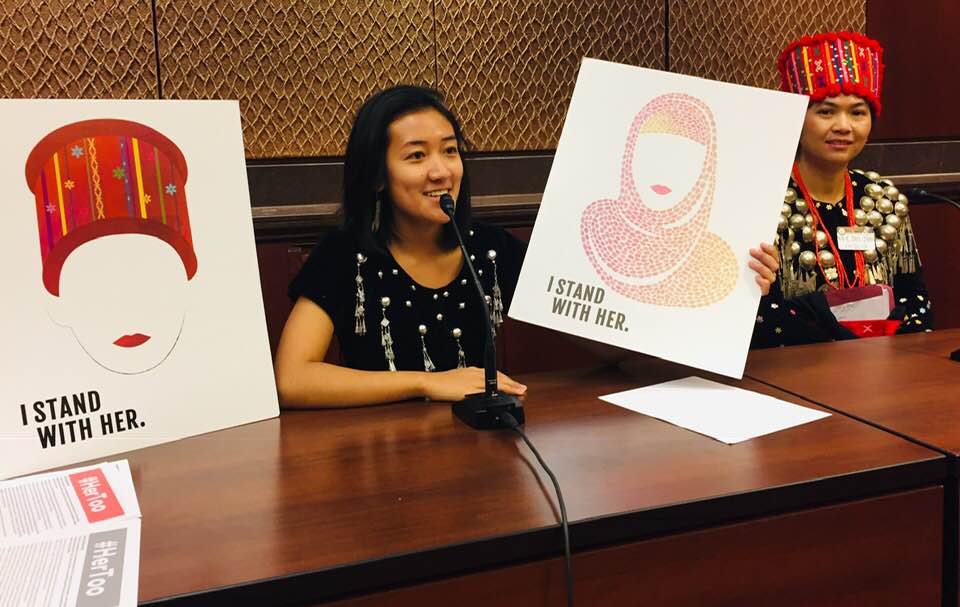 6. What is the most rewarding aspect of being a female activist?

I would say that the most rewarding aspect is feeling and being seen as rare…? So in that sense, I do sort of feel like a special pioneer in my own way, not only because of my gender but also because of my unique hyphenated identity and young age. I am setting an example for other girls my age and girls younger than me to not be afraid to dream big and simply go for whatever field it is that they are called to and feel passionate about.

The most rewarding aspect is also the sisterhood I get out of Burma advocacy work. I have so many new aunties and sisters now thanks to this struggle!

7. Tell me about the BURMA Act and how to get involved with your organization.

Yes! So the BURMA Act is a bill that GM4MD is pushing for through the U.S. Advocacy Coalition for Myanmar (USACM) which is a coalition of about 20 or so Burma advocacy organizations/ ethnic-based community organizations. Together, we are connecting members of the Myanmar-American diaspora to their Congressional offices to bring pressure to get this bill passed as soon as possible. Although it’s not the end-all, be-all solution to the problems happening in Burma right now, the bill would significantly help the people of Myanmar during this extremely rough time by authorizing $250 million in humanitarian aid and $50 million in aid to support democracy efforts on the ground. The bill also has key language to recognize the Rohingya Genocide (which occurred in Burma in 2017), and language to ensure the rights of the Rohingya so that nothing terrible like genocide ever happens again.

To get involved with the USACM, follow @usacm3 on Facebook, Twitter, and Instagram to stay in touch. Also, feel free to contact us on any of those social media pages or by email at usacm.3@gmail.com. If you’d like to learn how to call or lobby Congress too for the BURMA Act, we can help you prepare and set up a meeting with your Congressional offices.

To get involved with GM4MD specifically, you can fill out the application form on our website to get involved. Thanks!